Insulin is produced in the pancreas and the Brockmann body (in some fish), and released when any of several stimuli are detected. These stimuli include the rise in plasma concentrations of amino acids and glucose resulting from the digestion of food.[47] Carbohydrates can be polymers of simple sugars or the simple sugars themselves. If the carbohydrates include glucose, then that glucose will be absorbed into the bloodstream and blood glucose level will begin to rise. In target cells, insulin initiates a signal transduction, which has the effect of increasing glucose uptake and storage. Finally, insulin is degraded, terminating the response. 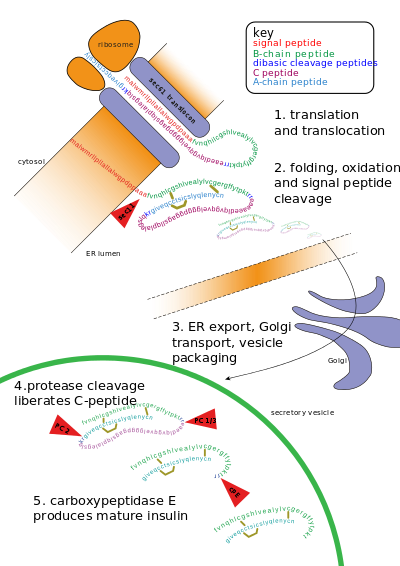 Insulin consists of two polypeptide chains, the A- and B- chains, linked together by disulfide bonds. It is however first synthesized as a single polypeptide called preproinsulin in beta cells. Preproinsulin contains a 24-residue signal peptide which directs the nascent polypeptide chain to the rough endoplasmic reticulum (RER). The signal peptide is cleaved as the polypeptide is translocated into lumen of the RER, forming proinsulin.[48] In the RER the proinsulin folds into the correct conformation and 3 disulfide bonds are formed. About 5–10 min after its assembly in the endoplasmic reticulum, proinsulin is transported to the trans-Golgi network (TGN) where immature granules are formed. Transport to the TGN may take about 30 minutes.[citation needed]

Proinsulin undergoes maturation into active insulin through the action of cellular endopeptidases known as prohormone convertases (PC1 and PC2), as well as the exoprotease carboxypeptidase E.[49] The endopeptidases cleave at 2 positions, releasing a fragment called the C-peptide, and leaving 2 peptide chains, the B- and A- chains, linked by 2 disulfide bonds. The cleavage sites are each located after a pair of basic residues (lysine-64 and arginine-65, and arginine-31 and −32). After cleavage of the C-peptide, these 2 pairs of basic residues are removed by the carboxypeptidase.[50] The C-peptide is the central portion of proinsulin, and the primary sequence of proinsulin goes in the order “B-C-A” (the B and A chains were identified on the basis of mass and the C-peptide was discovered later).[citation needed]

The resulting mature insulin is packaged inside mature granules waiting for metabolic signals (such as leucine, arginine, glucose and mannose) and vagal nerve stimulation to be exocytosed from the cell into the circulation.[51]

The endogenous production of insulin is regulated in several steps along the synthesis pathway:

Insulin and its related proteins have been shown to be produced inside the brain, and reduced levels of these proteins are linked to Alzheimer’s disease.[52][53][54]